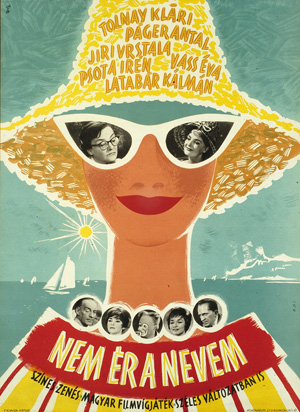 >> View collection Magyar Nemzeti Filmarchívum contributes approx. 1,200 film posters, which provide an overview of the Hungarian poster art from the beginnings of Hungarian cinema in 1900 to the 1990s.

Detailed description provided by the archive:

In the first decades of the twentieth century the growth of Hungarian poster art luckily coincided with the first prime of Hungarian film production, and as a matter of course, with the bursting popularity of the movie. Similarly to the commercial posters of the age, the lithographic film posters attracted the audiences by displaying strong coloring, strident, modern and amazing characters, as well as a great variety of typographic means. In accordance with the peculiarities of the genre, the artists making movie posters rose beyond academism, and they were affected by Art Nouveau, as well as by other artistic movements to come. The works of the well-known poster artists of the age, particularly of  Lipót Sátori, Imre Földes, Mihály Bíró, Lajos Csabai Ékes and others, do not only hand down a peculiar aesthetic approach to posterity, but many times they also feature as unique documents of lost Hungarian silent films – with the early works of Alexander Korda and Michael Curtiz (Mihály Kertész) among them.

From the early twenties on, parallel to the increasing perfection of printing industry, the striking, modern typographic elements were to turn more emphatic, while in the thirties and forties a special kind of movie poster was developed, called „strip poster”, which was characterized by its deviation from print norms, resulting in a radically vertical form of approximately 34-40 cm by 80-90 cm.   The posters of the renowned artist of the period, of Sándor Bortnyik, Róbert Berény, Marcell Vértes, later of György Konecsni and their contemporaries, faithfully represent the everyday and movie gusto and the style of the age.

The posters of post-war Hungarian film production, soon to become nationalized (the fifties), were made with very few exceptions according to the indoctrinations of the official “socialist realism”. Subsequently, from the sixties down to the late eighties, once again there were made highly professional, strident film posters of great variety, not only to advertize Hungarian, but also foreign films distributed in Hungary. The artists making film posters, particularly Gyula Macskássy, Tibor Csernus, István Balogh, Károly Schmal, Margit Balla, Wanda Sziksznian, István Orosz and their contemporaries, never failed to advertize the films in accordance with the requirements of the art of poster-making, yet remaining faithful to their own personal styles.

Since the early nineties, film posters relying on enlarged scenes taken or compiled from the film to be advertized, have been booming also in Hungary, still allowing for a few artistic film posters to emerge from time to time.