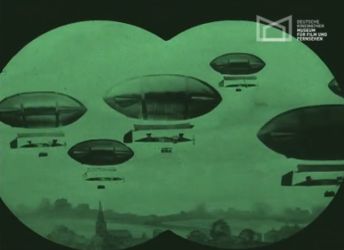 >> View collection The World War One collection from the archives of the Deutsche Kinemathek contains over thirty films as well as other film-related material such as film related documents, posters and film stills.

A selection of non-fiction works such as documentaries and short propaganda films feature in this collection, among them "Das Säugetier", the aim of which was to vilify the enemy Great Britain and keep up German morale, and "Der Heimat Schützengraben", which promoted and advertised the purchase of war bonds from the Reichsbank.

The collection is also largely composed of longer feature films, many of which were produced between 1914 and 1918 but often deal with themes seemingly unrelated to the war, showing how film was still used in wartime as entertainment on the home front and as a distraction from the events and difficulties of the war.

There are also a number of feature films made in the decades following the war, most of which adopt an ideological stance against the war. Among these later films the digitised version of G. W. Pabst's famous anti-war classic "Westfront 1918" can be seen.