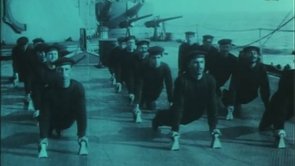 >> View collection The National Cinema Museum in Turin makes available a series of fiction and documentary films preserved in its collection. The titles selected include some documentaries assembled with material shot by the Sezione Cinematografica del Regio Esercito Italiano [Royal Italian Army Film Department] and three fiction films which are useful for exemplifying the diverse ways of featuring war themes within entertainment cinema: Il canto della fede, typical patriotic drama, La paura degli areomobili nemici, slapstick with a vague antimilitary intent restored in collaboration with the Fondazione Cineteca di Bologna and La Guerra e il sogno di Momi incredible stop-motion animation. Specific films shot during the war in Libya by Luca Comerio show with participation the various Italian Army corps which would be engaged only a few years later in the world conflict; in this instance we are presenting the prints restored in 2012, in which original colouring has been reproduced. Furthermore, the Museum provides access to some landscape documentaries shot in the 1910s, in which serene celebration of natural and artistic beauties is in sharp contrast with the tragedy of the war.